Debbie Smith, CEO of the AHA! Movement Honored by the Jefferson Awards Foundation

“When I lost my son to hazing, my world fell apart. Although I could not believe that people were able to commit acts this horrific against those they considered ‘brothers’, I never lost my belief in the goodness of people as a whole. This was due to the outpouring of love and goodness that I felt every single day. My community was there to pick me up, support me, and bring me back to life. I was even able to forgive these young men for their part in Matt’s death, because I understood that hazing was something they learned by example. It’s in this vein I aim to build a community of awareness, advocacy and support around the dangers of hazing,” said Smith.

The Jefferson Award Foundation, whose mission is to empower others to have the maximum impact on the things they care about, promotes programs and partnerships to drive Americans to change their communities and the world.

The AHA! Movement’s goal is to prevent injury and death by changing the culture of those organizations who participate in the humiliating, degrading, torturous and potentially deadly acts of hazing.

The AHA! Movement is hosting their first annual Monte Carlo night on Friday, August 25th.  AHA!’s Monte Carlo night is a black-tie affair, emceed by local personality/musician Paul Cotruvo. The event will run from 6-11PM local time. Guests will enjoy an elegant buffet, cocktails, dancing, a live auction, and professional gaming. Sponsorships and event tickets are available via AHA!’s website.  All proceeds will go to benefit the AHA! Movement and their mission to end the senseless and tragic cycle of deaths from hazing.

The AHA! Movement is a national non-profit founded and run by Smith in loving memory of her son, Matt Carrington who was tragically killed in a water hazing while pledging a fraternity at California State University, Chico. Working closely with then State Senator Tom Torlakson, Smith was the catalyst in getting a California law passed to amend the California Education Code, and California Penal Code allowing felony charges for some hazing rituals, and for the first time, gave prosecutors the ability to seek hazing charges against nonstudents. The bill was signed into law on September 29, 2006 by then California Governor Arnold Schwarzenegger, and named Matt’s Law after Smith’s son.

The AHA! Movement was founded in 2015 in loving memory of Matthew Carrington by Mother, Founder and CEO Debbie Smith, MM, is a national non-profit, dedicated to hazing awareness. The AHA! Movement focuses on outreach, education, and prevention of hazing related injuries and deaths through the development of educational awareness programs geared towards high school and college aged kids. Smith is available for speaking engagements and is actively seeking partners and donors. For more information about Matt story, please visit www.wemissyoumatt.com and to donate to the AHA! Movement please visit www.ahamovement.org. 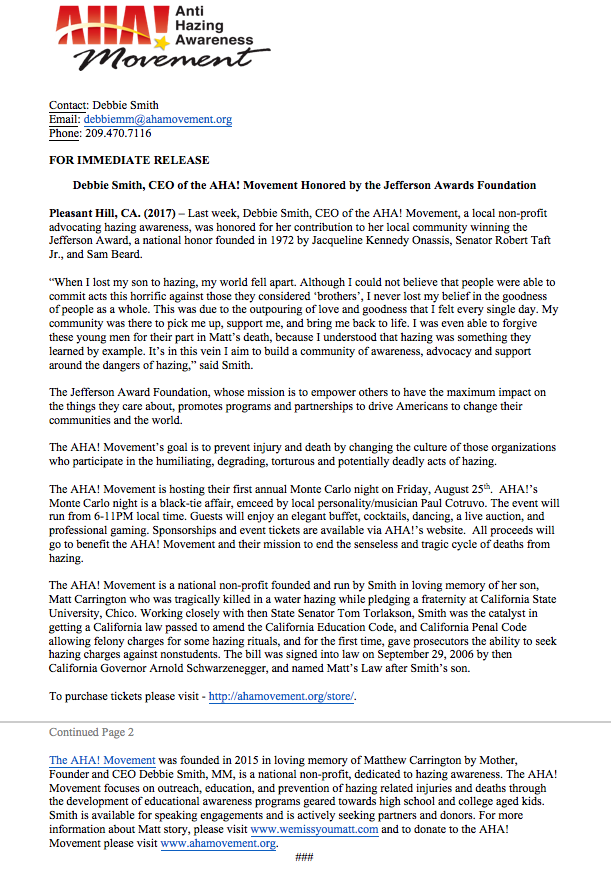 Notice: Trying to access array offset on value of type bool in /bitnami/wordpress/wp-content/plugins/smartwaiver-waiver-widget/smartwaiver_wp_plugin.php on line 57